Digital Yacht NMEA Interfacing products provide smart and cost effective solutions for connecting dedicated marine electronics to the latest consumer devices such as smart phones, laptops and tablets. Both traditional wired and the latest wireless interfaces are available allowing you to easily transfer NMEA data to your mobile device. Whether you are an iPhone/iPad, Android, PC or Mac user, wireless (or wired) interfacing can now be simply added to your existing navigation system with the addition of one of Digital
Yacht’s smart little devices.

We’ve also created NMEA gateways to multiplex the NMEA data or to connect and convert the NMEA data to an ethernet network, Seatalk1, USB or even the new innovative standard called Signal K. iKonvert is our NMEA0183 to/from NMEA 2000 converter.

NMEA 0183 is the most common standard on board and almost every marine electronic system has an NMEA 0183 input and output. It is important to note that there are two different NMEA data speeds (baud rates) which you may need to configure:

In addition, there are other “un-official” data rates, such as 9600 baud used by some non-marine GPS systems and much higher 115,200 and 230,400 rates used by high performance PC software. Knowing the different NMEA speeds is important when connecting and linking different marine electronics products.

Although most of the new marine electronics products use the new NMEA 2000 standard (see below), they often retain at least one NMEA 0183 interface for connection to legacy systems.

This new standard was developed to accommodate the increasing amount of marine electronics on board modern vessels and the diverse range of data that needed to be communicated on the network. It has been designed to be a very easy, plug-and-play system, where devices and sensors plug in to a network “backbone” (sometimes called “trunk”) that runs the length of the vessel, linking everything together.

The “backbone” can supply both data and power (limited capacity) to any device that connects to it and operates at a much higher 250Kbps data rate than the older NMEA 0183 standard. For good, error-free, data transfer, the “backbone” must be fitted with terminators at each end of the cabling to balance the signal loading and then each device is connected (“spurred off”) using a “T-Piece” connector and drop cable which all use standard Waterproof connectors for maximum reliability and interoperability.

We are regularly asked “what do I need to have an NMEA 2000 network onboard?” This prompted us to create a cost effective and smart NMEA2000 Starter Kit that is ideal for smaller boats but can also be easily expanded in the future. 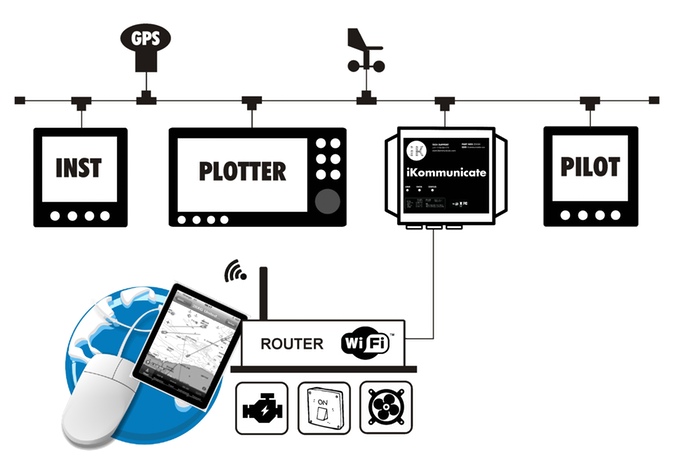 Things are changing in the world of marine electronic interfacing with the introduction of a new open source platform called Signal K. It aims to be the next generation solution for marine data exchange. It is intended to be used not only for communication between instruments and sensors on board a single vessel, but also to allow for sharing of data between multiple boats, aids to navigation, ports, marinas, etc. It is designed to be easily implemented by web and mobile applications and to connect boats and ships to the Internet of Things Afloat.

Many of you will be familiar with NMEA data standards which have been prevalent over the past 30 years.  These standards were developed when the instruments on the average boat were much simpler and less capable. However, we don’t see the NMEA standard disappearing over night but equally a new format is needed for the next advance in applications. In fact, the combination of NMEA and Signal K on board is the best technical opportunity. That’s where iKommunicate comes in – a full featured NMEA to Signal K gateway and server allowing existing marine electronics to integrate with Signal K apps.

All our NMEA to WiFi adaptor products to send the boat data (NMEA) to the tablets, PCs and smartphones.

All our NMEA interface products such as the NMEA0183-NMEA2000 converter, NMEA to Signal K, NMEA2000 starter kit, NMEA multiplexer, etc.

All our SeaTalk1 products such as NMEA to Seatalk converter and GPS with SeaTalk1 output.